I decided to install thrust bearings on both sides of the MLG pivot bushing to prevent the metal-metal (bushing to bolt-holder) contact and potential wear and slop in the MLG system.  This mod was first described by Dale Alexander in the Builder’s Forum section of Velocity Views 1Q 2004.  To accommodate the width of the thrust bearing, I had to grind down the existing steel pivots that have already been glued into the gear legs.  Care was taken to grind only enough to fit the bearing in place, and to maintain the position of the gear leg on the pivot bolt (because the retraction mechanism has already been fit). The grinding was followed by fine filing to make sure that the remaining bushing edge was flat and perpendicular to the pivot axis.

After the thrust bearings were installed, the MLG legs moved very smoothly. The side of the fuselage and portions of the gear pockets were trimmed to allow the gear legs to retract fully without interference.  Adequate clearance between the gear user legs and the sump tank fittings was verified. 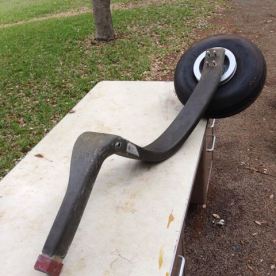 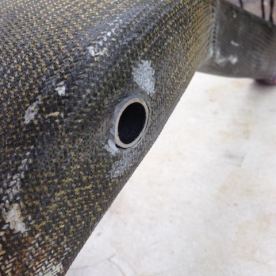 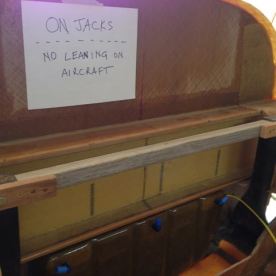 I have decided to depart from the plans regarding oil cooler location and cabin heat.  I plan to put the oil cooler in the rear of the aircraft, and use the nose NACA inlet for cabin fresh air only.  Details, calculations, and full plans to follow later. To control the amount of fresh air entering the aircraft, I am building an electrically actuated door that will fit flush in the NACA inlet when closed, sealing it completely against incoming air, and also retaining the fuselage contour. When open, outside air will be routed to cabin ducts for cooling in the hot Texas summer.  In the winter, and at altitude, the nose NACA duct will be closed, and hot air from exhaust muffs will be mixed with outside air and routed from the engine compartment into the same ventilation ducts. 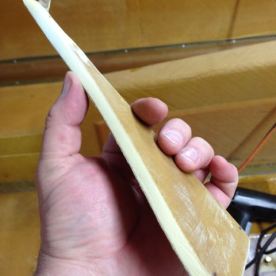